As programmes Manager (Middle East and Africa) for SeedDev, Watti- Boaz Olorunjuwon coordinates the activities of a fast-rising not-for-profit organisation on the quest to drive the wheels of technical innovations on the continent by equipping children in underserved communities with basic computer skills.

In a chat with Zumalo’s Paschal Chukwuma and Blessing Natty,Juwon a graduate of Computer Science(FUTA) shares his thoughts on the success so far and the plans on how SeedDev aims to reach 1 million kids by 2020.

It is a not-for-profit organisation that is dedicated to taking education in the fields of Science, Technology and Maths to kids in rural areas around Africa. “We believe that kids, no matter the career path should be tech-oriented. Look around today, is there a profession that does not require tech?”, he explained. The journey began after piloting with an Hour of Code event in 2015 in partnership with Microsoft, an annual campaign by Code.org which is organized to commemorate Globally, Computer Science Education Week.

Watti Boaz explains that majority of the schools located in the Urban areas understand the benefits of integrating technology into their curricula, a lot of the rural schools do not due to constraints in finance and internet access, among others. Often times Children in these rural areas are not even exposed to opportunities in the tech space that they can leverage that they do not even get to make decisions to go into them as careers.

However, as much as we are not going back on our goal to reach out to Africa, we want to start with rural areas.

What projects has SeedDev Handled so far?

According to Juwon, 2017 was a year of projects. “We partnered with the Ondo State Oil Producing Area Development Commission (OSOPADEC) to train about 2500 kids from the oil-producing areas in the state. We also took the training evangelism to secondary schools in places like Akure, Ife, Niger, Lagos, Abuja and other places across the country”, he explained. 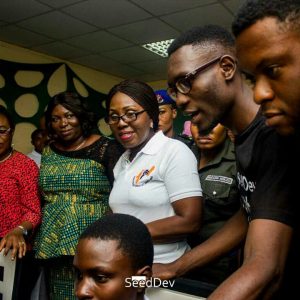 SeedDev participated in the Africa Code week for 2017, the hour of Code(Microsoft) and partnered with the Ondo State First Lady to training about 100 girls at a summer boot camp in Akure. As at the last count, over 7000 kids have been trained. When we asked about major challenges SeedDev has experienced, he had this to say: “It’s expedient to know that challenges are inevitable in all facets of life, SeedDev not left out. As a not-for-profit organization, it was quite difficult to get volunteers as curators. Nobody was ready to work for free. (I am sure you understand). Interestingly, now we have a change of story. Securing funds was not left out of the challenge since we had no partners. Again, I say—the story has changed; better than when we started. However, he emphasised that “more funds + more partners = successful projects.

On the next steps,he says…

We want to partner with government, agents and well-meaning international and national agencies and multinational tech companies to execute projects. As part of our aim to train 1 million kids by 2020, we will be extending our training outreaches to other African countries (Working with curators in these countries). The goal is for every rural area we visit to have a “Seed Box”—an internet enabled, airconditioned and solar powered computer facility usually in form of a container (box). It will serve as digital literary center for the kids located in the region. It will be strategically located in a way that curators will be hired from higher institutions close to the location of the Seed Box.

In building a skilled Africa, the journey starts from equipping the next generation.

An Evolving World of Online Advertisement