The rocket which took off Thursday from Kennedy Space Center in Florida just after 6 pm ET delivered a pricey communications satellite into orbit and managed to land all three rocket boosters after launch for the first time.

The Falcons have landed pic.twitter.com/BGQRNuYMVH

Arabsat 6A (A Lockheed Martin-built satellite as part of batch contracts worth $650 million) will update satellite coverage for Arabsat, which is based in Riyadh and delivers hundreds of television channels and radio stations to homes across the Middle East, Europe and North Africa.

Only two outer cores made it back to earth in one piece the first time Falcon Heavy flew back in February 2018. The centre core of that launch missed its target drone ship when it failed to light all three engines needed to land because of fuel shortage. Although the rocket booster slammed into the ocean at 300 miles per hour, the synchronized booster lander has become one of the most iconic images of the launch.

However, the successful SpaceX launch managed to stick all three landings and all three boosters used for this flight are upgraded versions of SpaceX’s rockets, Block 5—a version made to optimize reusability, making it easier for the company to land the vehicles and then turn them around quickly for future flights. Reusable hardware is part of Falcon Heavy’s appeal.

The rocket is by far the most powerful operational launch vehicle in the world and a plus when it comes to price at $90 million which is a third of the price of its closest competitors, United Launch Alliance’s Delta IV Heavy—a joint venture between Lockheed Martin and Boeing. With its latest ultra-powerful rocket, SpaceX will be competing with its rival for lucrative contracts that require heavy-lift launch vehicles and has already been chosen for a few contracts, including a 130 million dollars contract to launch a US Airforce satellite.

The Falcon Heavy is expected to be used primarily for US military missions, and to launch spy satellites and hefty commercial telecom satellites. 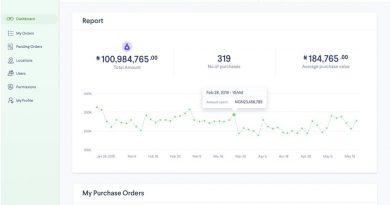 Gloo.ng is Pivoting to a B2B e-Procurement Company

March 12, 2019 Opeyemi Olugbemiro Comments Off on Gloo.ng is Pivoting to a B2B e-Procurement Company

Accelerating the Industrialization Agenda in Africa

March 28, 2019 Guest Comments Off on Accelerating the Industrialization Agenda in Africa